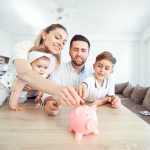 It’s never too early to start thinking about what’s ahead financially, especially when it’s for someone who hasn’t yet learned how to count to ten.

From organising a trust to setting up an ISA on their behalf, there’s plenty you can do to give the children in your life a springboard into the future.

One way of doing this is to set up a pension on behalf of a child or young person. In this post we’ll be exploring why you might wish to consider this financial step and its benefits and limitations.

Do I need to set up a pension for my child?

Deciding to establish and begin contributing to a children’s pension (or junior pension) on behalf of a young person is entirely optional – it’s very much up to you.

Putting aside money for a young person is common enough practice. Financial products like trusts or ISAs can be set up to allow the child access at an agreed time, such as turning 18.

We tend to associate pensions with sixty rather than six-year olds, and assume young people won’t need to think about such things until much further down the line. But you can set up a pension for a child as soon as they’re born, and begin contributing to it.

Getting ahead of the financial curve

When it comes to pensions, the sooner you start contributing, the better. If you pay more into a pension at the beginning of your life, you’ll be paying less later on.

If you set up and begin contributing to a children’s pension, it’s effectively giving the child a running start at something they are more than likely to need later in life.

It’s also free of tax, meaning it can begin to increase quickly depending on the pension’s interest rate, your contributions and how it’s invested. It’s also flexible: you can start and stop payments any time alongside submitting any amount, from as little as £25 per month to big lump sums.

And while many young people will grow up to join companies that will contribute to their pension, others may choose self-employment or other routes. Having a pension already set up and accruing interest could prove helpful for those who won’t be able to rely on a workplace pension.

A strict limit on when the young person can benefit

Like any pension, there are strict limits on when the money invested can be accessed. The pension moves into the child’s name at 18 years old; however, they cannot access the funds until they are 55. And from 2028, that age increases to 57*.

For some, a junior pension might be a great way to ensure that the young person gets the benefit when they’re older and wiser.

On the other hand, it does limit what the money can be used for. Even if they wished to use the money for something like purchasing a car or a house, they won’t be able to touch the money without a hefty 55%** tax bill in some cases.

In the meantime, once it’s in their name at 18 they don’t have to continue contributing to it. However, if they choose to pick it back up at a later date, building on an existing figure might encourage contributions more than an empty pot.

Setting up a pension for a child or young person is just one way to save for their future, however, it can also be an opportunity to encourage them to be engaged with their finances.

Having a pension set up and handing it over to them around the time they enter the workforce could be a powerful educational tool, especially if you talk to them about it from a young age and get them involved.

However you choose to build a steadier financial future for the young people in your life, the most important thing is that it’s the right decision for you.

Our team at HWIFM can help you explore different options, weigh up each approach, and choose a route forward that best reflects your priorities. Speak to us today about planning for a young person’s future (and perhaps your own) 01606 338914.

* This is to accommodate the increasing state pension age. Pension plans already in place in February 2021 may be able to keep the protected pension age of 55, however the government consultation is ongoing at time of publication.

** This figure is related to the current tax position, which may be subject to change.